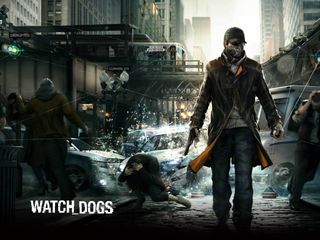 A government with no respect for its citizens' privacy. A population increasingly dependent on smartphones for everyday tasks. A hackable operating system with the power to control a whole city. "Watch Dogs," the latest open-world action game from Ubisoft, does not exactly take place in the real world, but it does provide an eerie picture of what modern society could become.

"Watch Dogs" hit shelves and downloadable services all around the world May 27, and it's the perfect time to explore what you need to know before diving into Aiden Pearce's journey through futuristic Chicago. From its basic premise to its surprising connections with another hit Ubisoft series, "Watch Dogs" is a big game, and there's a lot to know before you jump in.

What is "Watch Dogs"?

For those who have seen advertisements for "Watch Dogs" plastered everywhere but don't know much else about it, here are a few things you should know about the game.

"Watch Dogs" tells the story of Aiden Pearce, a vigilante hacker out to right a wrong from his past. To that end, he can use his smartphone to profile and manipulate just about every person and electronic device in Chicago.

In this story, Chicago is controlled by the Central Operating System, or CtOS. This single piece of software is responsible for Chicago's municipal amenities, traffic patterns and even its security and surveillance. Because just about everyone in Chicago has a smartphone or a computer, everyone is a potential target for Aiden, whether he needs to hack a bank account for money or steal a car to evade the police.

As such, the gameplay is a fairly unique blend of simulated hacking, exploration, gunplay and stealth. You'll spend most of your time as Aiden, hacking citizens and city systems, traveling to new areas of Chicago, playing novel augmented-reality games and either evading or battling law enforcement and other dangerous hackers.

All the while, Aiden will unravel the mysteries of his own past and learn about how a connected population and an overbearing government can affect a major metropolis. If you were furious about the National Security Agency's Prism program and wanted to see the NSA's actions taken to their logical extremes, "Watch Dogs" is the game for you.

How does "Watch Dogs" connect to "Assassin's Creed?"

If you've been reading the description of "Watch Dogs" while thinking, "This sounds an awful lot like a modern-day 'Assassin's Creed,'" you're not alone. "Watch Dogs" has a lot in common with Ubisoft's time-hopping open-world series, and if you paid very close attention during "Assassin's Creed IV: Black Flag," you may know why.

In theory, "Watch Dogs" is essentially what you'd get if you brought the "Assassin's Creed" franchise into the present. Like the "Assassin's Creed" protagonists, Aiden explores a meticulously accurate city, securing individual neighborhoods and completing side missions as he goes. The game allows (and occasionally demands) parkour platforming, precise stealth and intense combat for a variety of plot missions and side quests. The setting is mostly realistic, while the story is steeped in conspiracy and intrigue.

The biggest "Assassin's Creed" connection, however, is right from one of the games. Although "Assassin's Creed IV" takes place mostly between 1715 and 1722, players also spend a bit of time in today's near future, exploring the offices of Abstergo, a puppet corporation controlled by the villainous Templars.

After completing the game's main story, players can hack into the computer of Olivier Garneau, one of Abstergo's higher-ups. Olivier receives a message from the Blume Corporation, offering to install the CtOS operating system at Abstergo's facilities.

Depending on Olivier's response, this could be the beginning of a strong connection between "Watch Dogs" and "Assassin's Creed." Either way, it's direct confirmation that the two games take place in the same fictional universe. If "Watch Dogs" becomes as successful a franchise as "Assassin's Creed," then expect to see more connections between the two series.

A final piece of food for thought: One of the primary themes of "Watch Dogs" is what happens when unethical, powerful collectives can track your location and movements at all times. The Observatory, sought by the Templar Laureano de Torres y Ayala in "Assassin's Creed IV," posed exactly the same question. Fans could discuss the parallels for years to come.

How realistic is "Watch Dogs"?

Aside from hoping for a good game, people who have been following "Watch Dogs" want to know: Could it really happen?

"Watch Dogs" is a safe, fictional way for modern-day technophiles to explore their fears about the far-reaching consequences of connectedness and surveillance, but whether it could happen in real life is another matter.

Tom's Guide is currently working on a detailed report about which aspects of "Watch Dogs" are totally make-believe and which are more realistic than we might like to believe. In general, though, "Watch Dogs" is unrealistic for one reason: the CtOS.

While, in theory, a city could choose to link its water, power, traffic control and surveillance to a single system, there's no real benefit in doing so. In fact, as Aiden demonstrates aptly in the game, doing so poses a real threat if the system were to be accessed by a savvy hacker.

Right now, many municipal systems run on arcane or antiquated software. This is arguably a security risk in its own right, but it does mean that the most prevalent hacks for modern Windows and Mac systems will have little effect on, for example, the software that manages a city's water supply.

Furthermore, even if a hacker did manage to compromise a city's water supply, its power lines and law-enforcement technology would remain completely unaffected. Keeping municipal services compartmentalized is a safety precaution, and cities know it.

Having a clean, convenient, ubiquitous OS would make it much easier to run a city — until someone compromises it and plays havoc with an entire neighborhood rather than just a single system.

The scenarios in "Watch Dogs" are not completely impossible, but it's probably better to treat them as representations of society's technological fears, rather than harbingers of what's to come.