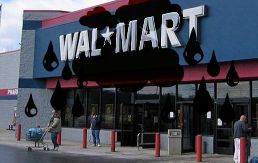 As you’ve probably heard by now, a temporary worker assigned to a Walmart in Long Island, New York, was trampled to death early Friday morning, by shoppers looking for doorbuster sales. “Doorbuster” turned out to be an unfortunately accurate term here, as, according to the New York Times, the crowd literally broke through the store’s sliding glass doors, minutes before the scheduled 5 a.m. opening.

Although I was appalled when I heard the news, I cannot honestly say that I was surprised. For years now, Black Friday has seemed like a tragedy waiting to happen. Every year, we hear reports of minor injuries: someone knocked to the floor, a blackened eye, a broken toe… whenever groups of people with a mob mentality repeatedly gather, the worst case scenario will eventually end up playing itself out, and that’s exactly what happened early Friday morning in Long Island. It certainly isn’t the first time we’ve seen this type of behavior.

Check out our Black Friday deals and Cyber Monday deals coverage for the best sales.

Next Page The History
37 Comments Comment from the forums