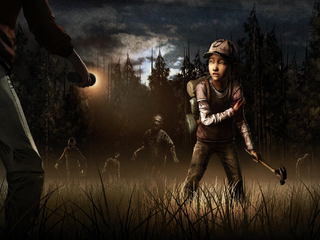 Clementine, a major character in season 1, will be the playable character in "The Walking Dead" season 2. Still just a child, Clementine will have to fight to survive in a world where zombies walk and the living can be even more dangerous than the dead.

"The Walking Dead" season 1 was a five-part episodic video game developed by Telltale Games in 2012. A spin-off of the popular "Walking Dead" comic books by Robert Kirkman, which also inspired the AMC TV series, the game put players in the role of Lee Everett, a survivor of the zombie infection who takes it upon himself to protect the orphaned Clementine.

In July 2013, Telltale Games released additional downloadable content (DLC) for "The Walking Dead," entitled "400 Days," which is supposed to bridge the narrative gap between season 1 and the upcoming season 2.

"400 Days" featured new characters and alluded to a community of survivors, suggesting that these individuals would become key aspects of season 2.

Now, we know for sure that Clementine will be along for the ride as well. Screenshots released along with the teaser trailer show the young girl, still wearing her signature baseball cap, traveling with a new group and confronting a horde of zombies with only a hammer.

"The Walking Dead" season 2 will arrive "later this year" for PC, Mac, iOS, Xbox 360 and PlayStation 3. Telltale Games says it will provide support for additional platforms after the initial release date.

As before, this season will consist of five episodes released over the course of the next few months, concluding some time in 2014.

Each episode will cost $4.99. You can currently preorder a season pass — all five episodes — on Telltale Games' online store or Steam for $22.49.

Concurrently with the trailer release, Telltale announced a Game of the Year edition for "The Walking Dead" season 1. It costs $29.99 and includes all five episodes, as well as "400 Days," the game's soundtrack and a behind-the-scenes video.