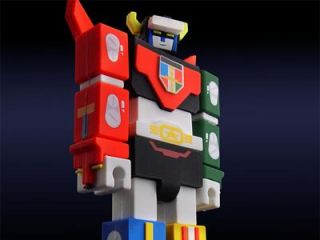 From days of long ago, from uncharted regions of the universe, comes a legend: the legend of...Voltron!

And what a legend it was. World Events Productions' Americanized version of an obscure super-robot anime grew to become one of the most popular Saturday morning cartoons of the 80's, and has become a pervasive cultural icon. So pervasive, that USB drive makers Incubot have decided to honor the mighty robot with a Voltron USB flash drive.

The flash drive is a blocky, slightly more cartoony version of the combining robot. Unfortunately, it's not 5 separate USB drives that form the Defender of the Universe; the USB jack is accessed by pulling it apart at the waist. Still, having this by your desk does evoke memories of that beloved cartoon series.

Voltron is Incubot's first foray into licensed material, having gained Internet fame for their original Nekobot designs. You can get your own lion-themed robot drive for $36.99 at Incubot's site. Personally, I'm hoping for a larger version that's made up of 5 USB lions, but hey, that's nostalgia for you.