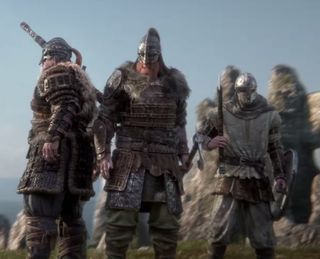 LOS ANGELES - French developer and publisher Ubisoft kicked off its E3 presence with a press conference that can best be described as "stay the course." Veteran hostess and actress Aisha Tyler oversaw the proceedings, where she introduced the latest entries in a number of long-running series, including Just Dance, Rainbow Six and, of course, Assassin's Creed.

One thing was eminently clear from the conference: In spite of being dead for two years, Tom Clancy's popularity has not abated, with three new high-profile games based on the late thriller author's works. Still, a familiar roster need not imply an uninspired one. Check out what Ubisoft had to show and judge for yourself whether the company is poised to excel over the next year or simply spin its wheels.

One of the few original IPs on display during Ubisoft's press conference, For Honor brings together two things players love: historical warriors and multiplayer action. For Honor teams up players up into two teams of four and lets them have at each other in glorious medieval style, complete with vikings, samurai and knights. With brutal, fast-paced combat and graphics that take full advantage of modern gaming systems, For Honor is a title worth watching, especially if you like competitive multiplayer but don't think much of gun combat.

Ubisoft already announced the new Assassin's Creed game, but we got to see a little more of it at today's press conference. Assassin's Creed Syndicate moves the series forward to 1868 in London, telling the tale of two assassins in the throes of the Industrial Revolution. Players will control Jacob and Evie Frye as they take back the city from the greedy Templars. There wasn't much new information today, save that players in Los Angeles as well as several cities across Europe and Australia will get a chance to go hands-on with the title soon; check the website for details.

The second Tom Clancy game in Ubisoft's lineup, Rainbow Six Siege marks the return of a beloved series to the gaming scene. Rainbow Six Siege focuses on close-quarters combat and hostage rescue situations. Teamwork is key, and precision is the name of the game rather than all-out bulletfests. Players will be able to play competitively, or team up with friends to hunt terrorists cooperatively (solo play is also available, if you really can't stand other people). A public beta starts on Sept. 24.

The Crew, Ubisoft's self-described "CaRPG" (and no, I will never be able to write that term without cringing), launched in Nov. 2014 to polite reviews, and since then, Ubisoft has been fine-tuning the cross-country racing game and prepping it for more content. Wild Run represents the game's first major expansion, and will add some heavy-duty trucks to the game's already extensive vehicle roster. If cruising the United States in a monster truck is your dream, now you can do it without the prohibitive gas prices.

Trials Fusion, as near as I can tell, is a game where cats ride fire-breathing unicorns in death-defying stunts, and this is just the order of the day. The game rests somewhere between a platformer and an extreme sports title, with a healthy dash of absurdity tossed in for good measure. The Trials Fusion Awesome Level Max downloadable content pack will bring new levels, new characters and new ridiculous challenges to complete.

The Division, a post-apocalyptic massively multiplayer action game based on the works of Tom Clancy, has been kicking around E3 presentations since 2013. The game may see a release sooner than later, however, as Ubisoft announced that The Division would finally come out on March 8, 2016. The company showed off what the game does best: large-scale skirmishes between opposing factions that necessitate a lot of teamwork to complete successfully.

The space race in the real world is disappointingly stalled, but Ubisoft sees no reason why that should extend to the virtual world as well. Anno 2205 winds the clock forward 200 years to let players control an earthbound civilization that wants to reach for the stars. This city management simulation charges players with creating a space program and taking humanity to the moon and beyond. Expect tight, strategic gameplay and gorgeous graphics to accompany your race of spacefarers.

Ubisoft claims that Just Dance is the bestselling music video game franchise of all time, and considering how ubiquitous it's been over the last few years, that's not hard to believe. Just Dance 2016 will bring a whole playlist of new songs, including hits from artist Jason Derulo, and will allow players without controllers to use their smartphones to compete. Potentially even more exciting is that current-gen consoles will have access to Just Dance Unlimited, which will provide dozens of new songs for a yearly subscription fee.

If The Crew is Ubisoft's ode to realistic car racing, then Trackmania is what happens when racing games go completely bananas. Trackmania is all about driving cars through physically impossible race courses as fast and as accurately as possible. Fly through loop-de-loops as you compete with other players, or design your own racetracks to stymie your friends and rivals. Races are fast, unforgiving, and addictive.

Once again demonstrating that not even death can stop Tom Clancy, Ubisoft closed the show with Ghost Recon Wildlands. This open world action game lets players hunt down members of a powerful drug cartel all around the world, in any way they choose. Frontal assaults, stealthy approaches and crashing headlong into a base with vehicles are all viable options as you conquer bad guys with a variety of guns. Wildlands looks big and ambitious, and it should be out sometime next year.