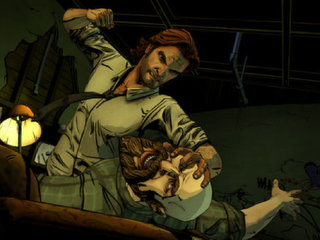 In 2012 Lee Everett and little Clementine won and broke the hearts of gamers worldwide as the lead characters in the video game "The Walking Dead." Now developer Telltale Games looks poised to do it again with the new game "The Wolf Among Us."

Fans of Telltale's "The Walking Dead" will find themselves in familiar territory: the game uses a similar art style to tell a story of complicated characters, unwinnable scenarios and heartbreaking choices.

The two games also share comic book roots; "The Wolf Among Us" is based on the still-ongoing graphic novel "Fables" by Bill Willingham. In the game, players take the role of Bigby Wolf, a.k.a. the Big Bad Wolf, who can also take a human form. Bigby lives in New York City, where fairy tale characters secretly live alongside the unknowing "mundies," or normal people.

"The Wolf Among Us" is an episodic game, meaning it's being released in five segments over the next several months (exact release dates have not been announced). The first episode, entitled "Faith," went live as a PC download from Steam on Oct. 11, where you can buy a season pass (all five episodes)  for $24.99.

Xbox Live and PlayStation Network versions arrived Oct. 11 and Oct. 15 respectively, where prices are $4.99 per episode or bargain $14.99 for a season pass.

Read the full review at Newsarama, or just get the game on Steam.