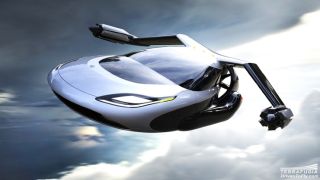 While Google and Tesla are working on self-driving cars, Terrafugia’s TF-X has its sights set much higher, literally.

Unlike its current car-plane mash-up, the Transition, the four-seat TF-X flying car looks like a modern sedan with catamaran-like pods hanging off each side. These pods are 600 hp engines with folding propellers, comprised of 16 motors each, which allows the TF-X to take off and land vertically and reach estimated speeds of over 200 mph.

For interested parties concerned that parallel parking a normal car is already too much of a challenge, fear not. Terrafugia says the TF-X won’t be much more difficult to operate than its land bound brethren, estimating about a speedy 5-hour training time. Terrafugia also includes a flight program that will automatically avoid obstacles such as other traffic, restricted air space and inclement weather.

Unfortunately, Terrafugia isn’t scheduled to produce the TF-X until 2021 at the earliest. To fill the gap, you can pick up the $279,000 Transition which already complies with all Federal Aviation Administration and National Highway Traffic Safety Administration Rules, although it doesn’t quite live up to the sci-fi dreams many people had as children.

Terrafugia isn’t the only company planning for a world with cars in the sky. The Slovakian Aeromobil 2.5 has already made is maiden flight, although its shaky performance and 100 hp engine and 107 knot top speed fall quite short of the TF-X’s projected specs.

Then there’s the GF7, which combines an electric motor when on the ground, and a massive 3,500-pound thrust jet engine in the air, with claims that it can reach heights of 38,000 feet and speeds up to 550 mph.

And let’s not forget the PAL-V, which is basically a helicopter mixed with a motor trike, which can reach speeds of 112 mph on both the road and in the air.

Before you know it, the skies will be filled with the rotors and flames of your rich neighbor's flying vehicles, but is the world really ready for that?