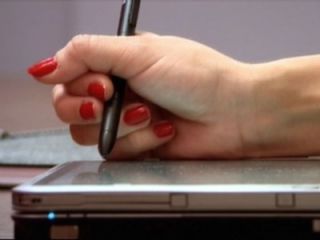 Better than a finger? Intro to styluses, brushes and pens

Drawing and painting with a stylus gives you more precision and control than using your finger. There are an increasing number of styluses for capacitive touch screens that aim to make it easier to write and draw on screen. Here’s our pick of the best styluses and pens that can really make a difference when you work on a tablet

Although there are a few Android and Windows tablets that still use resistive screens – where you can use a fingernail or a hard plastic stylus, more and more tablets have capacitive screens that work directly with your finger. If you want to use a stylus with these screens, it has to be one that allows the natural electrostatic field of your body to reach the screen, so it has to be made of metal and other conductive materials.

The tip is likely to be relatively broad because capacitive screens expect something the size of a fingertip and the smallest touch they detect (the ‘hit target’) is usually around 7mm (although the system can usually detect the center to let you draw finer lines). Even if you’re using a stylus that looks like a brush, it’s a single point on screen being detected. And with capacitive screens, you can’t rest your hand on the screen while you’re drawing unless you have a combination screen.

There are plenty of basic styluses on the market with conductive foam tips; our favorite of these is the BoxWave Capacitive iPad Stylus (and like any capacitive stylus it works with any capacitive screen, despite the name). The list price is $25 but you can usually find it online for $15.

It’s a little shorter than a standard ink pen, with a thin barrel and a big rounded tip of conductive foam; this can drag a little as you move it over the screen and you may have to press more firmly than you expect to tap buttons, but the lines you get will be more accurate (especially if you have large fingers). If your tablet didn’t come with a stylus it probably doesn’t have anywhere to attach one with a lanyard; the clip for the BoxWave Stylus fits into the headphone socket so you’re less likely to forget it. If you’re serious about digital art there are styluses that give you better control, but this is the best of the budget options.

Active digitizers used in more expensive Windows tablet PCs, on Wacom tablets and in the new HTC Flyer tablet, have smaller tips – much more like a pen – and product very smooth, accurate lines so they’re ideal for drawing or writing but they need a special layer in the screen, which puts the price up. Dedicated Wacom tablets (including the pricey but powerful Cintiq screen that you can draw on directly) are pressure sensitive, so just like a real pen or brush, the harder you press the thicker the line you draw (and you can get pens in the shape of a felt-tip or even an air-brush nozzle).

An increasing number of Windows tablets have combination screens that let you use an active pen or your finger, so capacitive styluses work. You can rest your hand on a combination screen while you’re using an active pen and your palm won’t make scribbles or smudges because the finger touch is turned off when the pen is detected; that doesn’t happen with capacitive styluses so again you have to keep your hand off the screen – less of a problem for painting than for taking notes.

Although the Microsoft Surface and Surface 2 tabletop computers are too big to think of as tablets, too expensive to buy for personal use and usually used with just fingers, the technology that’s in them can detect almost anything because it’s a camera – in the original surface it’s behind the screen, in Surface 2 it’s optical sensors in each pixel. That means it can detect a pen or paintbrush – and tell that it’s different from a finger. Microsoft Research used this to create a prototype ‘drawing table’ (literally held together with duct tape, according to principal researcher Bill Buxton) that it showed off at the MIX conference in 2010 with painting software that modeled the brush, the paint, the paper and the light reflected from it, under the name of Project Gustav (the software was originally developed as a way of testing high performance computing systems and parallel programming techniques by accurately modeling brushes and paint properties).

Nick Kamuda (who worked on Zune and the Metro interface) also happens to be a trained artist and he painted with the table live on stage using a Wacom stylus to draw with then putting down the pen to smear the pastels to get the effect he wanted – or dragging the paper around and changing the angle he was working at.

“It's not pen or touch,” Buxton explained to us; “It’s pen and touch. We have two hands; it’s about how the two work together in context. It’s extremely subtle to distinguish when you intend to smear and when you intend to move the page…” There’s a prototype version of the software (called Digital Art) on a standard Dell touchscreen PC in the Material Lab exhibition at the New York Museum of Modern Art this summer, and Buxton has predicted that Surface-type screens will be available as home systems within three years, which means the future of tablet art is going to be even richer.