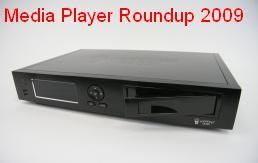 The Year Of The Media Player

The year is almost at an end. While the year was chock full of praise-worthy trends in technology and consumer electronics, one new fad emerged that took our living rooms by storm: stand-alone media players have become a must-have accessory for any home-theater setup. Ranging in price from $90 to $300 or more, these typically small boxes bring a PC-like media experience to your television set. Whether you want to watch your collection of ripped DVDs and Blu-ray discs or listen to your library of 1980s metal, media players allow you to stream content over the network and play files from USB or internal hard drives that attach to the devices.

While most media players have features that can be roughly explained in a few sentences, the similarities between them are often swept to the side by the presence or absence of must-have perks, such as BitTorrent clients, Internet services like Pandora or Flickr, and file support so robust you won’t possibly be able to take advantage of it fully.

We got our hands on five different media players from Western Digital, ViewSonic, Patriot, Asus, and Popcorn Hour. All of the players share the same basic functionality, but each was designed with the hopes to separate itself from the pack through innovation, convenience, and drool-worthy bonus features.

Each media player is evaluated based on five primary categories:

Connectivity: The more connection options there are the better. HDMI, Ethernet, and USB are almost standard now, but we want to also see composite, digital-optical out, WiFi, eSATA, and other connectivity options.

Interface: Since most media players share a basic functionality set, the user interface is what separates the contenders from the wannabes. Just as important as the software user interface (UI) is the physical interface. This includes the remote control and whatever buttons there are on the media player itself.

File Support: Again, most media players are going to share similar file support, so this category will distinguish the players that go the extra mile. This includes supporting files like Flash video (FLV) and RealMedia files.

Picture/Sound Quality: What’s the point of streaming and supporting 1080p video at 60Hz if it looks bad? Hopefully, the picture quality in these media players is solid across the board, but we will still look for poor quality across a range of file types.

Extras: Another way for media players to distinguish themselves is by offering extras that aren’t available in competing devices. This includes features like BitTorrent clients, Internet services like radio and photo sites, and the ability to act like a media server or external hard drive.

Each category is worth up to five points. After the points are tallied, we also figure in other factors, such as overall value, ease of use/setup, and firmware updates. May the best media player win!