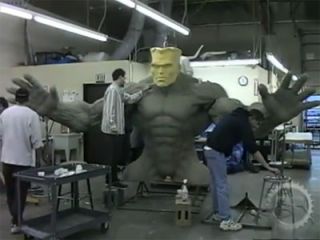 Opinions are divided whether Ang Lee's Hulk was a psychological journey unnecessarily punctuated by annoying radioactive-poodle-beat-ups, or a cheesy action movie that did not have enough tank-smashing. The only middle ground for both camps was hatred for the CGI Hulk. Perhaps Mr. Lee and his production should've opted for animatronics instead? For at least one point during the production process, they were planning to.

The animatronic Hulk you see above was developed by Steve Johnson for the 2003 film. Not only did they build a 1:1 scale gamma-irradiated Bruce Banner, they even made an arm designed to expand and tear its sleeves off. The whole thing looks beautiful, although from its movements it's pretty clear why they went with the Shrek-faced CGI Hulk: animatronics just don't move as realistically as well as a mo-capped CGI character can.