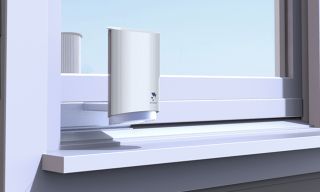 If you're looking for blazing-fast home Internet but don't want to wait for Google Fiber or deal with Comcast or Verizon, there's still hope for you. A new startup called Starry hopes to give you another high-speed Internet choice. Founded by Chaitanya Kanojia, the former CEO of Aereo, Starry plans to use new technology to deliver Gigabit broadband to your home. The crazy part? Its all wireless.

Starry says its Internet service uses a phased-array technology to broadcast Internet connectivity and convert it to a millimeter-wave signal that's transferred to home receivers. You put that receiver, called a Starry Point, in your window to receive Internet speeds of up to a gigabit. The setup taps into underutilized high-frequency spectrum, according to Starry, and is completely wireless. You'll be able to install a Starry Point in your home without any help from a technician.

Starry's Internet service debuts in Boston this summer, with plans to roll out to additional cities. The company has yet to announce how much this will cost but promised in a press release that there will be no data caps.

MORE: Don't Rent Your Router: Here Are the Best to Buy

Gigabit internet is rare in the United States, and its capabilities are astounding. Google claims you could stream five 1080p videos simultaneously without buffering and still have bandwidth for lightweight web surfing.

Starry also announced a separate product, the Starry Station router, which sports a 3.8-inch touchscreen and a $349 price tag. The touchscreen is the star feature of this 802.11ac router, giving you an at-a-glance view of what devices are connected and whether your Wi-Fi network is experiencing any problems. (A red-bubble around a device on the touchscreen alerts you to connectivity problems, for example.) The touchscreen also can display your Wi-Fi name and password when it's time to add devices to the network, and the router includes features for managing your kids' screen time. Starry says its router is also 802.15-ready for use with future connected devices.

The success of Starry will depend on how well the millimeter-wave technology works and how quickly it can be rolled out. The people of Boston will find out first this summer, with more cities to be announced later this year.