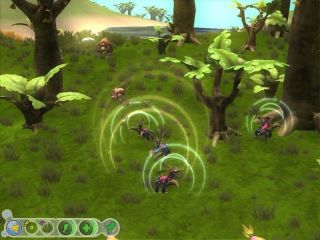 In less than a month since its release, Spore has sold more than one million copies since shipping on September 7. Mind you, that one million mark was spread across PC, Mac and Nintendo DS, making that number seem slightly less impressive.

“Spore is a hit,” said Frank Gibeau, president of the EA Games Label. “Will Wright’s latest delivers an incredibly diverse game that appeals to casual gamers and the core alike. We’re off to a great start moving into the holiday season and believe Spore will deliver a platform of creativity for gamers of all stripes for years to come.”

Spore players have been largely productive too, uploading more than 25 million creatures, vehicles and buildings to the Sporepedia.

“We’re humbled by how quickly the community has taken to the creativity tools in Spore,” said Lucy Bradshaw, vice president of Maxis and Spore’s executive producer. “It’s amazing to see the sheer imagination represented in the hundreds of thousands of creatures, vehicles and buildings that have been uploaded around the clock since launch.”

Spore’s success hasn’t been without several hurdles, however, as the game was met upon release with outcry from its fanbase for the restrictive and inconvenient copy protection methods in place.

Amplifying matters even further was a class action lawsuit filed against EA also complaining that the game forces the user to install SecuROM protection software along with the game, causing some undesirable side effects.

The ongoing plight of PC piracy continues as legitimate, paying gamers are suffering the pain of copy protection while the anti-piracy measures have done nothing to stop cracked versions from being distributed on the Internet.