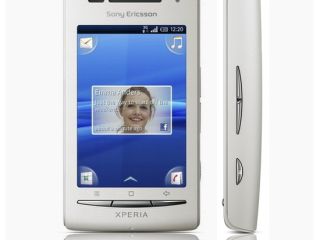 Specs-wise there's still no info on the Sony Ericsson Xperia X8 (also codenamed as the "Shakira"). But pictures are always worth a thousand words, so here are some images of the rumored touch-screen Android OS offering from Sony Ericsson.

Clearly the camera won't have any flash, and the sparsity of any physical keys indicate a touch-screen interface. The images only reveal three navigation buttons on the bottom of the display, and a volume rocker and camera button on the right side. Smartphone anorexia enthusiasts may also raise eyebrows at the gadget's thick profile. From the look of things the X8 will also have at least one customizable widget-based home screen. Updates to follow as they arrive.