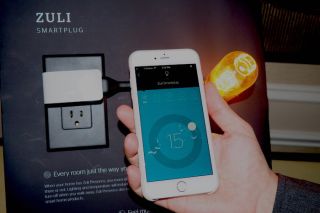 LAS VEGAS — There are a number of smart plugs that can turn any lamp into an Internet-controlled device, but Zuli takes its plug one step further. By creating an ad hoc Bluetooth mesh network between three or more of its plugs, Zuli can follow you through the rooms of your house, turning lights on and off as you enter and leave. Available for preorder now, the Zuli, which is being sold in packs of three for $135, should hit store shelves by April.

Through a smartphone app, you can manually control any light or appliance connected to each Zuli plug. In my brief hands-on time, it was easy to dim a bulb attached to the plug. Additionally, the app can tell you how much power is consumed by an appliance connected to a plug, and can give you tips to better conserve electricity.

But the real power of the Zuli comes when you connect three or more plugs in a Bluetooth mesh network. Plug one in each room, and after a short setup, the system learns the boundaries of each room. From there, you can set the app to automatically turn lights on when you enter a room, and turn them off when you exit.

Zuli can be configured to work with multiple users, so that if your lighting preferences differ from a spouse or roommate, and the system can adjust the lights accordingly. You can also set up guest access.

When the product ships in April, it will also work with Nest and the Logitech Harmony universal remote control. So, for instance, Zuli will automatically dim the lights and turn down the heat if it senses you walking into your bedroom at night. Or, if you're watching a movie on Netflix, it can automatically pause the film if you get up to use the bathroom.

Connected plugs are a relatively inexpensive way for consumers to test the smart home waters. However, Zuli's mesh networking technology gives it an advantage over other smart plugs in that it goes beyond mere manual control, offering an extra level of automation and intelligence.