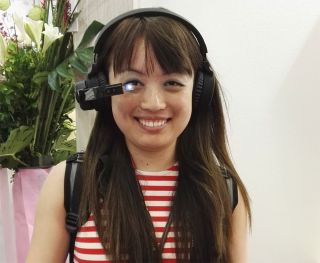 TAIPEI, Taiwan - In what could be music to your ears, ChipSip launched a new SiME Smart Headphone at Computex. The headset looks like it is the result of a tryst between Google Glass and a set of over-ear headphones. The device may be available in the third quarter of this year at a price yet to be confirmed. The Taiwanese company says it will cost slightly more than its previous Smart Glass heads-up display ($550 for developer version).

Imagine if you were wearing a gaming headset with a microphone you could push up and away from your face. Now replace that microphone with a Google Glass-like prism. That's what putting on the Smart Headphone is like. Since our review of the SiME Smart Glass, ChipSip has been hard at work improving on areas we found lacking, including an adjustable arm for the prism, a brighter display and longer battery life.

During my time with the Smart Headphones, I found the device comfortable to wear. The adjustable arm was easy to use and mold, but it could be more sturdy. While what I saw was just a prototype, ChipSip says the headset will get a longer arm and feature some other changes when it hits the market.

You can rotate the arm 360 degrees along the ear cup, so you can place the display in front of either eye. I liked the soft, comfy ear cups, which muffled out most of the noise from the show floor when I put them on. ChipSip told me the headphones will have noise canceling when they are launched. They did not specify if that would be active or passive noise canceling.

The company doubled the size of the battery since we reviewed the company's smart glasses. It may now last 2 hours longer, which is still pretty short. The Smart Headphone, like its heads-up display predecessor, runs full Android 4.4, but you can install a custom interface to make navigation easier. ChipSip showed me a system they designed for tour guides, which requires left and right swipes to scroll through options, and up and down to select or go back. This was definitely much easier than trying to control a cursor on the miniscule display.

ChipSip also created new apps to let you control the Smart Headphone via your phone, to make things such as connecting to a Wi-Fi network and setting up the device easier.

In an odd way, the headset design makes a lot of sense, since one of our complaints about the Smart Glass was its unwieldy earphone attachment. But the key question is, why would anyone want something like this? ChipSip told me it is targeting the mass market with the Smart Headphone by touting it as a multimedia device, but I can't imagine anyone possibly enjoying watching a video on such a tiny screen. Sure, you can send your music to the headphones via Bluetooth and view your lyrics in mid-air, but having to squint to see it proves too troublesome to be helpful.

ChipSip also told me that future versions of the Smart Headphones will, inexplicitly, come with two display arms -- one on each ear cup. Each screen will display the same thing so you can see your content in stereo. The company also said it will tweak the device so that the prism sits at a distance from your eyes that makes it unnecessary to squint. I'm skeptical about the Smart Headphone's appeal for now, but if the company lives up to its promises, the device could have greater potential.

Cherlynn Low is a Staff Writer at Tom's Guide. When she's not writing about wearables, cameras and smartphones, she's devouring old episodes of Torchwood or The X-Files. Or taking selfies. Follow Cherlynn @cherlynnlow. Follow Tom's Guide at @tomsguide and on Facebook.