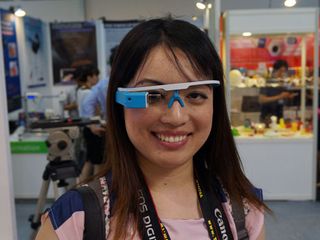 We've been following ChipSiP since we first saw the Taiwanese company at Computex last year showing off a prototype wearable computer that ran full Android. The company now has a more refined version of its heads up display ready for a look here at Computex 2014, and we had a chance to try it out.

Now named the SiME (or SiMEye) Smart Glass, the glasses have a more finished look, compared to the units we saw earlier that either had wires hanging out of them or were only one half of a frame. In colorful blue, orange and black frames, the headsets look similar to Google's Glass, with the exception of the rectangular blocks near the frames' earpieces. Overall the demo units on display were somewhat flimsy and tilted to the side due to the weight of the built-in screen.

At the company's booth, an augmented reality tour was set up so that when we snapped a picture of a painting or television display with the SiME, additional information showed up on the device. We were amused by the dancing figures of Chinese deities that popped up from posters as we scanned a desk with the glasses. This feature could be one way SiME gains an edge on Google, which is still lacking a good augmented reality application for its Glass.

ChipSiP's SiME runs a full version of Android 4.2.2, with plans to support Android 4.4 KitKat by July. With the full OS, SiME users will be able to download apps directly from the Google Play Store to the smartglasses. Google's Glass,which runs an Android-based interface, requires you to download apps through the headset's MyGlass app on your smartphone

The one downside to running Android on this form factor is that navigation can be clunky. The SiME, for example, saw us use our fingers on a touchpad on the side of the frame to move a cursor around the interface.

In addition to its touchpad, the SiME Smart Glass includes hardware buttons for volume control and the camera app. A 5-megapixel shooter that captures 1080p video sits next to the the SiME's prism display. ChipSiP executives told us they also plan to make a version of the SiME that can take 120 degree-wide pictures. By comparison, Google Glass's 5-MP camera can only shoot 720p resolution videos.

Unfortunately, while Google Glass uses bone-conducting technology to transmit audio to the wearer, the SiME requires you to use a separate pair of headphones. Inside, the SiME uses a 1.2-GHz dual-core Cortex-A9 processor, backed by 1GB of RAM and 4GB of storage. It also gets an independent GPS and supports Bluetooth 4.0 LE. With a 570-mAh li-ion battery, the company expects to deliver a modest 1-hour runtime, but intends to work on providing more juice.

ChipSiP execs told us they hope to release a developer version of the SiME by July, for $1,000. By the time it's ready for public consumption, which could take as many as two years, the company hopes to lower the headset's price to a more affordable $500.