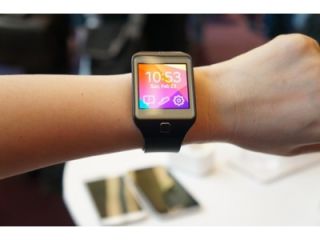 Heads-up Dick Tracy, Samsung may have a new watch phone for you. Samsung is reportedly working on a variant of the Gear 2 equipped with a USIM chip capable of making standalone voice calls.

The watch, which is expected to launch on Korea's SK Telecom, will be a bit bulkier than the current Gear 2, which goes on sale next month, in order to incorporate the USIM chip, as well as a larger battery. This info comes via a report by the The Korea Herald.

Samsung's Gear 2 and Gear 2 Neo both let users make and receive phone calls, though they both need to be tethered to a smartphone via Bluetooth. With the USIM chip, however, the watch would be able to make calls without a connected phone.

This isn't the first smartwatch to offer standalone voice calling capabilities. As the Herald points out, LG launched its own LG Watch Phone in 2009, which was able to make calls over 3G. The upcoming Neptune Pine also offers SIM Card support.

The Gear 2 rumor comes just a day after Google officially unveiled its Android Wear operating system for smartwatches. The OS is expected to offer Google Now like services, as well as Android app integration, the ability to stream music from your smartphone and push video to your TV.

Interestingly, Google named Samsung as one of the tech companies working on an Android Wear device. This is despite the fact that Samsung's Gear 2 and Gear 2 Neo run on its own Tizen operating system, which is incompatible with Android.

via The Korea Herald