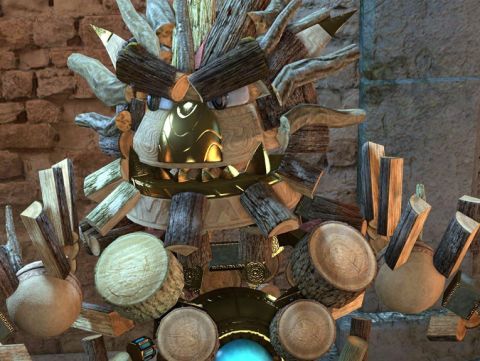 While "Knack" provides a moderately diverting adventure, there won't be much reason to pick it up after the PS4's library improves.

A knack for platformers

A game console rarely gets its best titles on launch day, and the PlayStation 4 is no exception to that rule. "Knack" is one of the few PS4-exclusive titles to release alongside Sony's new system, but while the game provides a moderately diverting adventure, there won't be much reason to pick it up after the PS4's library starts to bulk up a bit.

"Knack" weaves the tale of the game's eponymous robot, who travels through forests, mines, mountains and cities as he fights off a high-fantasy menace and builds himself up to monstrous proportions with ancient relics. The game is mediocre on every level, which makes it all the more disappointing that Sony chose to kick off a brand-new console with it.

Mark Cerny, the PS4's lead architect, directed "Knack," and longtime Sony fans will recognize his work immediately. Cerny previously produced and designed classic Sony platformers such as "Crash Bandicoot," "Spyro the Dragon," "Jak and Daxter" and "Ratchet and Clank." "Knack" feels a lot like those celebrated games — only not as good.

The game is a very straightforward action/platformer, so expect to spend the vast majority of your time leaping from platform to platform, punching enemies into oblivion and hunting for items that can heal Knack or activate his special attacks. There's not much else to the game.

The game's central gimmick is that Knack is a golem comprising ancient relics. As a result, whenever he comes across additional relic stockpiles, he can use them to heal himself and become larger and more fearsome. Knack starts most levels as a tiny teddy bear of a robot, and it's extremely gratifying to make him grow to the size of a small building and crush formerly devastating enemies in one hit.

Knack's transformations are also one of the places where gameplay falls down. Collecting more relics will sometimes cause Knack to grow, but they will just as often act as simple healing items. Knack's size seems more dependent on story cues than on player exploration, which makes growing and shrinking feel very arbitrary.

The game's combat is also very dry, regardless of Knack's size. Knack can hit enemies with a three-hit punch combo, target them with a double-jump homing attack or collect gems for three costly special abilities, but that's about the extent of his arsenal for most of the game.

Certain levels let you incorporate ice or wood into Knack's body, but it only changes his appearance, not his fighting style. Combat gets repetitive fast, and on top of that, it's incredibly difficult. Knack can barely withstand any damage, no matter his size, and the enemy AI is relentless and surprisingly clever.

There's nothing really wrong with the gameplay in "Knack," but it's disappointing compared to Cerny's other platformers, which have done much more impressive things on much less impressive hardware.

It's clear that "Knack" wants to be a Pixar film in video game form, but it has neither the narrative nor the writing chops to accomplish that goal. The story is disjointed and predictable, and the script is filled to the brim with hackneyed archetypes and tired clichés.

When human cities come under attack by a race of belligerent goblins, the kindly Doctor volunteers Knack — a tough-talking golem recovered from an ancient civilization — to investigate how the goblins advanced from swords and bows to guns and tanks in such a short time.

Along the way, the Doctor and Knack are joined by teen lab assistant Lucas, suave adventurer Ryder, shifty industrialist Viktor and devious security chief Katrina. There are a ton of characters to meet before the first chapter is even over, and most of them are extremely one-note. In fact, Knack is arguably the least interesting — and least important — character in his own story, with almost nothing of value to say.

Although the setting — an original mix of modern-day planes and tanks with high-fantasy goblins and sorcery — is an interesting place to spend the 10 hours or so it takes to play through the storyline, the story, characters and script don't do it justice.