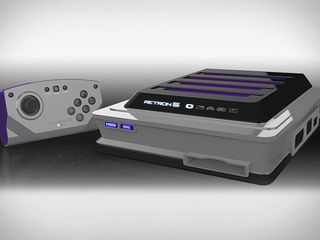 Back in March, Hyperkin first put out word of its RetroN 5, a "classic" game system that would allow you to play SNES, Sega Genesis, NES and other games, but with HDMI support for modern HDTVs. Hyperkin, the manufacturers of the console, gave us a test drive, and the visual upgrade was startling.

The console is similar in build to Hyperkin's previous systems. It comes with the main unit, with various slots for Super Nintendo, Genesis, Mega Drive (Japanese Sega Genesis), NES, Super Famicom (Japanese Super Nintendo) and Game Boy Advance games. It does resemble a neon-colored toaster, but each of these slots represents the various systems that it supports, with no muss and no fuss.

Two wireless controllers are included, similar in build to the classic Sega Genesis six-button pads.  You can configure them however you please, through a sub-menu that can easily be pulled up with the press of a button. The RetroN 5 also supports official Nintendo and Sega controllers used with those systems in the past. They plug right in.

Where the RetroN 5 truly makes a difference is in the visuals. Using HDMI connectivity, the system is able to do away with scanlines that had put jagged edges on characters and items in the environment.

To test this out, Hyperkin reps invited me to try out "Mike Tyson's Punch Out!!," a boxing game for the Nintendo Entertainment System. At first, I didn't notice any differences. However, after going through the sub-menu and applying the proper graphic filter (in which there are three settings to choose from – you'll want to simply turn scanlines off first before messing with the other ones), it made a complete turn-around. Characters now had a much cleaner appearance, making the game look like an HD re-release rather than the original product.

The system operates with the help of an SD card that will come packaged in order to save various settings for multiple games.

If you prefer, you can leave the scanlines on and play the "old-school" way, as the games originally were. However, as you can see from the screenshots we've included, the "clean" look may be the way to go. The choice is yours.

With its easy-to-adjust graphic settings and its quite effective support of HDMI, the RetroN 5 just might be a viable system choice if you're looking to get back into classic gaming.