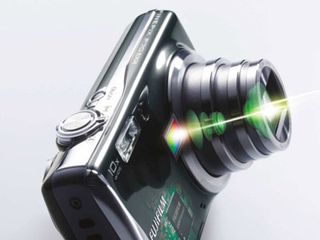 It's not been a particularly exciting year for Polaroid. Probably the most exciting thing it announced was that Lady Gaga had been appointed Creative Director of the entire company (seriously). However, it seems Polaroid is eager to kick off 2011 with a bang, as they've been teasing a big event at CES.

The company used last year's CES appearance to announce Lady Gaga's new role and promised we'd see Gaga inspired products in late 2010. Since we've yet to see any, and previous reports suggest we'll see a whacky Gaga-inspired Polaroid product in Q1 of 2011, we're guessing that the following teaser for this January 6 event might have something to do with Lady G.

Sent to Engadget, the image shows a Polaroid camera obscured by darkness with the accompanying tag line, "Grey revealed."

Through the wonders of computer wizardry – also known as jacking the exposure way up – Engadget was able to shed some light on the matter.

Surprise, surprise, it looks like a regular, old Polaroid camera – nothing zany or weird looking about it. But hey, maybe it takes meat-flavoured photos? Stay tuned to find out!