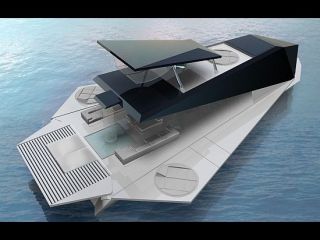 A winner of the so-called "Millennium Yacht Design Awards", the Origami Yacht features an angular design very reminiscent of the boat's Japanese-inspired name. The primary selling point this concept however are the side walls which fold down when the boat is anchored, creating a wedge-shaped profile that easily reminds sci-fi geeks of Star War's Imperial Star Destroyer.

Why would you want a yacht that opens up? Apparently yacht goers would love the increased access to the sea air and the better views created by such a reveal. The walls also turn into additional deck space when folded down, with both sides featuring the same rotating observation deck also mounted on the top of the yacht, directly in front of the bridge.

When the Origami Yacht needs to move, the walls fold back up, creating an aerodynamic shape for quick and easy cruising. The concept yacht currently remains on the drawing board of Italian designer Fabio Federici, and there's no word yet on any planned retail availability.

But a price estimate of 6 million euros is currently making the online rounds. Would you pay that much for a yacht whose walls fold down? We're assuming that significant sum also pays for some luxury furnishings and on-board gadgets.