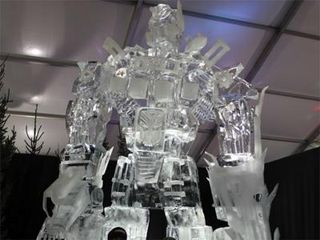 The concept is simple: two warring robot factions come to earth in search of alternative energy sources. Of course, there's a part of your brain yelling, "how the hell can giant robots go gallivanting across the planet without drawing attention? Why by transforming, how else?

From its humble beginnings as a mediocre Japanese toy line, Transformers has exploded into pop culture. It's had three hit TV shows, two explodarrific Michael Bay movies, and millions and millions of plastic origami figures.

Sculptors Antti Pedrozo and Michel de Kok pay tribute to the franchise by carving this 26-foot tall ice rendition of Optimus Prime, the noble, catchphrase-spouting leader of the Autobots. For those keeping score, that's the Michael Bay incarnation of the mighty robot.

The icy Optimus (Optim-ice?) is currently on display at the Dutch Ice Sculpture Festival. He will be joining other frozen renderings of big screen heroes until February 27 of next year.