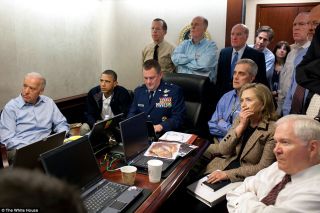 With the popularity of shooters like Call of Duty, Modern Warfare, Medal of Honor and the Battlefield Bad Company series, there's clearly a continued fascination with modern day scenarios.

It's only natural, then, that there be an Osama bin Laden shooter. Kuma War got its 107th and final episode, which is a mission on the bin Laden compound. You can grab that mission here if you've got the game.

Perhaps even more interesting is the browser-based game Bin Laden Raid, coming from a site called News Gameplay that hopes to engage an audience by letting them experience it in an interactive fashion.

Jeremy Alessi, one of the game's developers, told Wired that his team finished the game in a 25-hour marathon coding session.

“The layout itself is not factual, just logical from the information at the time,” Alessi told Wired. The developers pieced together the map from Google Maps and made the layout based on the video footage released to news organizations.

“Running through the sim gives a perspective that cannot be communicated any other way,” he says. “[Players] witness firsthand what was seen from the ground and perhaps a few similar thoughts are shared between the person who experienced the event for real and the person who just used the sim.”

Check out the video below and then play it here.