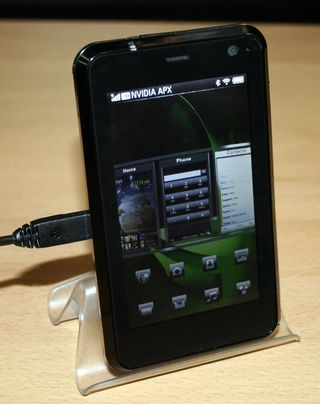 Here’s most likely one of the most interesting attraction of this year’s show. NVIDIA introduced a processor for smartphones that supports HD and 3D. We have to admit that the result was breathtaking.

The application processor APX 2500 can render impressive 3D interfaces, but also play videos in high definition on a Windows Mobile phone. NVIDIA pushes the envelop as the prototype actually had an HDMI connexion allowing videos in a phone to be played onto an HDTV. To make it all possible, the firm transposes her HD video decoding technology on the mobile market. Moreover, the manufacturer optimized the processor to save as much energy as possible. NVIDIA promises 10 hours of battery life in HD mode with the prototype showcased.

A prototype with a solid configuration

In regard to the operating system, NVIDIA worked closely with Microsoft to offer a version of Windows Mobile that’s enhanced with a superb interface as can be seen on the video. The processor will hit production by the end of the second quarter and we can hope for the first smartphone before the end of the year.