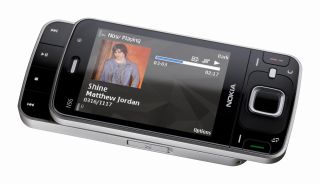 The rumor has finally come true. Nokia, leader of the mobile market, has taken the spotlight of this MWC with a breaking news. The longed for N96 is finally here.

A N95 that goes the extra mile

With a more welcoming design than its predecessor, the N96 continues to take advantage of the double slider keyboard/multimedia pad. Its screen goes up to 2.8” and its internal memory rises to 16 GB, as an answer to the recent iPhone update.

However, the N96 goes beyond Apple’s phone as it also integrates an A-GPS chip and manages Wi-Fi, Bluetooth and HSDPA. The N96 also adds a DVB-H tuner to profit from mobile digital TV.

Nokia busts also the Internet open. The N96 will read Flash programs and thus videos on websites like YouTube or Dailymotion.

The only mobile devices that were able to do that were Archos multimedia player of the fifth generation. Here is again another assault to the iPhone which most likely owns, as of today, the best mobile browser but that lack Flash compatibility. The N96 will be available in Europe in Q3 2008 at 799 € naked.