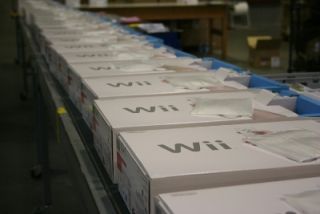 Supposedly, Wal-Mart is throwing up "tens of thousands" of Wii consoles onto its online store beginning today.

The catch is that currently there are no Wii consoles for consumers to purchase... at least not at the time of this writing despite Wal-Mart’s boisterous claims. It’s certainly no surprise that the retail outlet is already out of stock: Nintendo struck gold with its interactive console stapled with an oh-so-affordable price tag, and consumers want it real bad. Nintendo reported earlier that shortages were possible this holiday season but would not be quite as drastic as last year’s barren offerings. Their claim holds true, but consumers will still have difficulty finding the coveted gaming console so close to Christmas.

But as for Wal-Mart’s apparently depleted inventory, it’s quite possible that the retail giant simply hasn’t unleashed its plethora of Wii consoles just yet. But as consumers flood here and salivate over the five bundles Wal-Mart’s online store offers, they will quickly find a quick jab to the gut after viewing the dreaded OUT OF STOCK captions written in a devilishly red font. The best bet for consumers is to check back everyday if time is not an issue.

According to the website, bundles start from $249.24 (which is actually the base console package only) and extend up to a meaty $458.00. The Nintendo Wii Value bundle, priced at $329.00, offers an additional Wii remote, additional Nunchuck controller, a choice of one "value" game, and an accessory starter kit in a collectible lunch (box) tin. But for $30 more, consumers can purchase the Nintendo Wii Consumer Choice bundle that basically offers the same ingredients as the Value bundle, but allows consumers to choose a more recent, expensive title.

For those wanting to purchase the Wii console for the entire family, Wally World has a great bundle for that option as well. The Family Fun bundle sells for $399.99, building upon the Consumer Choice package but includes an extra game. For those who burn Ben Franklins rather than wood, the $458.00 Wii Fit bundle throws in the highly coveted Wii Fit product (can’t really call it a game) and Balance board.

With all this Nintendo goodness, consumers heading to Wal-Mart’s online store looking for the Wii will come away empty-handed. But fear not: the retail outlet apparently still has Nintendo DS Lite packages in stock, including the Limited Edition Mario Red.... wait, nevermind—that just went into out of stock mode too. The Limited Edition Ice Blue bundle is still there (momentarily) as well as the Holiday Value bundle and the Starter bundle.

But with Christmas just a few weeks away, time is probably better spent shopping rather than reading some fool’s news post about disappearing Nintendo products. Perhaps Wal-Mart will reload its online store with additional goods, however it’s rather unlikely.