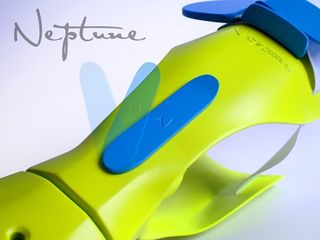 Just like Aimee Mullins using her lower leg prostheses to gain advantages unheard of to "normal" people, The Neptune gives the handicapped the ability to swim at a potentially higher level.

The Neptune is a flipper-prosthetic combo. This concept's engineering supposedly minimizes stresses on the joint between the amputated limp and the actual gadget, while allowing reconfiguration for different types of strokes.

The potential result? A swimmer with shorter "legs" and with flatter "feet"—two advantages that are practically impossible for the natural human body to achieve. Even if the amputee still has to use their own muscles to propel themselves, the whole stroke becomes more streamlined and thus more effective.

The thinking behind The Neptune is the kind that looks to turn drawbacks into benefits. Instead of looking at the limitations of a handicapped existence, it's definitely better to imagine how such a state can be maximized. For that we have designer Richard Stark to thank.