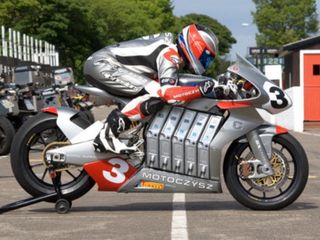 What happens when you load a motorbike frame with a bunch of heavy batteries, and a small yet ultra-powerful electric motor? Something close to the MotoCzysz E1pc perhaps?

Today an American company will race its two-wheeled baby at the Isle of Man TT (Tourist Trophy), touted as one of the most demanding motorbike races in the world. Practice runs with the E1pc provided a top average speed of 94.6 mph and a top speed of 140 mph. The 2010 Isle of Man TT is held at a 37.733-mile course, with its trickiness leading to over 200 deaths in race history.

The MotoCzysz ("Moto-sizz") E1pc still can't compete with high-performance internal combustion bikes (the record for top average speed is 131.578 mph). Yet it has, in the words of Popular Science, "the competition quaking in their leather." The MotoCzysz also uses a horn, given the quietness of even the fastest electric vehicles as they zoom down the road.

Its five battery packs feature a total capacity 10 times that of a Toyota Prius. The electric motor, which fits in a tight space between the rear wheel and the batteries, can generate a sustained 100 horses and 250 Lb-ft of torque.

The 2010 Honda Civic Hybrid has a 110 hp engine, but only creates 123 lb-ft of torque at most. More details are available through the link below.

The Inside Story of the MotoCzysz E1pc, the World's Most Advanced Electric Motorcycle