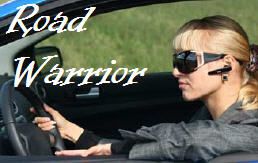 Call it an outcome of the always-on digital lifestyle, but these days most of us have to work whenever we happen to be, whenever duty calls. That can be in a traditional office, but it’s just as likely at home, at a coffee shop and, increasingly, in a car, says Kate Lister, coauthor of work at home self-help book “Undress for Success” and an expert on telecommuting.

“At any point in time, 80 percent of American workers are on the move, going from here to there, often trying to work out of a car,” explains Lister. “The car is becoming the natural place to work but the technology needs to catch up.”

The bad news is that the typical car isn’t exactly work-friendly. It has neither desks nor the AC outlets, data connections and printers that we depend on in a traditional office. The good news is that a car generally has a wrap-around view of the world that rivals the best corner office, good air conditioning and even the equivalent of a comfy couch in the back.

A lot that can be done to turn a car into a killer mobile office. By stuffing my car full of digital creature comforts, I’m going to transform it into a workplace on wheels so that I can work where and when I want.

I’m starting with my 2006 Mercedes E350 station wagon that I previously added satellite radio to. In essence, I’m going to trick out my ride by adding an office full of these techno-goodies so that I can work from the road:

A Buddy Desk  to hold a Fujitsu T4410 Tablet PC computer and keyboard and give me a place to work .

To add AC outlets, I have a TrippLite PowerVerter PV375 power inverter and a Globe power strip to get the juice where it’s needed.

Sooner or later I’ll need to print documents, so I have a Canon Pixma iP100 printer with Bluetooth adapter to do away with the pesky USB cable

Instead of an ordinary mobile phone, HP’s iPAQ Glisten Smartphone will handle my communications and mapping needs and because holding a phone and driving don’t mix, Blue Ant’s Supertooth Lite hands-free speaker phone is part of my office.

Verizon’s MiFi 2200 WiFi router will perform mobile magic by connecting with Verizon’s 3G network and delivering bandwidth to my office on wheels with an internal WiFi network.

Finally, so that everything stays put when I drive, I’m going to use a combination of magnetic  and Velcro adhesive tape.

This project should take about an hour and doesn’t require any special tools. But before we go any further we want to make sure you understand that there’s a time and a place for work, and that’s not while driving. So, when an email comes in, when you have that career-changing idea, or when the phone rings, be smart enough to pull over and park the car (err, office) to follow up on it. Whatever it is, it’s not worth your life or mine.

Current page: How To: Put Your Office on Wheels

Next Page Be a Power Player