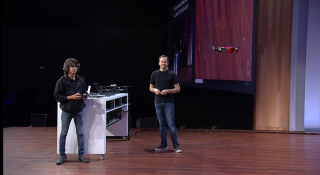 SEATTLE — On stage at the Build developer conference, Microsoft demonstrated how DJI and Rockwell Automation can use the Azure cloud platform with enterprise drones to avoid costly, dangerous situations for workers.

Sam George, director of Azure IoT, had a dashboard up simulating where issues might crop up in a factory. One such issue featured a pressure drop on a roof that could be dangerous to technicians.

DJI is adding Azure's IoT Edge to drones, which companies can then deploy using artificial intelligence. On stage at Build, DJI showcased both a massive enterprise drone, the M200, and a smaller Mavic Air. Then, a representative from DJI flew the Mavic Air over some pipes on stage, and George could see the anomaly on a laptop running Azure IoT Edge.

Were this a real-life situation, a worker might have to personally head up to the roof to assess the problem, putting them in harm's way. The drone-and-cloud software setting lets workers diagnose a potential problem from a safe distance.