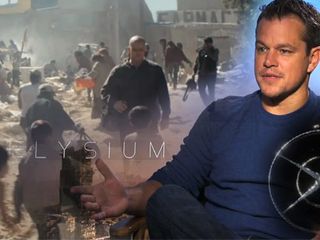 In the split universe that is Neil Blomkamp’s summer action movie “Elysium,” the "haves" live, quite literally, above the “have-nots.” And what the “haves” have is a painless lifestyle facilitated by jealously guarded technology.

If these themes seem allegorical to present-day conflicts over universal health care, freedom of information, immigration policy and ubiquitous surveillance, you are not wrong. But writer-director Blomkamp didn’t want his social justice message to get in the way of the film’s popcorn-munching action. We spoke with “Elysium’s” star Matt Damon about striking that balance:

“Like ‘District 9’, Neil really loves to inject these themes that have some resonance and relevance to the world we’re living in now,” says Damon. “He wants to entertain and he wants everyone to come into the theater and just unplug and see just a big sci-fi action movie. But he doesn’t want it to be empty spectacle. He wants the movie to stay with people.”

Blomkamp’s “Elysium” is a cautionary tale about what happens if all the good gear winds up closely held by the elites of society. Ironically, here in our real world, the clear trend has been toward technology as a widely self-proliferating and disruptively democratizing force.

But sometimes, that doesn’t happen without a fight: witness ObamaCare vs. the “wealth-o-rati.” And ubiquitous tech doesn’t come without the possibility of abuses: witness United States’ NSA over-reach, Facebook dossier-compilation and Google micro-targeting.

MORE: The Top 10 Most Popular Superheroes, According to YouTube

In “Elysium”, the fight gets personal. Damon’s character Max must battle his way to an exclusive orbiting salvation-station to save his own life. In the process he will save much more – and, paradoxically, lose much more. But first he must make it through badass Kruger, played by Sharlto Copley (District 9).

Elysium's truly mortal combat becomes that much more epic as both warriors are enhanced with high-tech biomechanical exoskeletons. Eight months of R&D and 75 revisions (at New Zealand's Weta Workshop) were needed to finalize the 'HULC suit' - the bio-mechanical exoskeleton worn by Max (Matt Damon) and Kruger (Sharlto Copley).

Kruger is part terminator, part Star Wars bounty hunter, and part ex-Special Forces turned mercenary. He personifies unbridled killing technology, ruthlessly applied. And he is scary. Conscience-free Kruger is as starkly terrifying as actor Copley’s District 9 character, Wikus, was beguiling and charming. But, as with Wikus, Copley injects moments of high comedy into his Kruger within nanoseconds of bloody horror and mayhem. We spoke with Copley about playing the schizoid, tech-enhanced villain:

“There was a dark, kind of sadistic humor to Kruger,” Copley says. “Neil has opted to keep him quiet and darkly lethal with little touches of the humor. We always knew it was going to be a careful crafting so that the audience didn’t like him too much.”

“She sees Elysium as utopia – what Earth could have been but wasn’t,” says Foster of her character, “She knows what will happen if you let everybody in – it’ll end up just like Earth. If you try to give Elysium to everybody, you’ll give it to nobody.”

“Elysium's” 22nd century tech is marvelous in the original sense of the word. There are some minor inconsistencies. If you have nanotechnology that can heal people in seconds, for example, you don't need big guns to kill them. But nothing in the film will trigger disbelief. And Blomkamp’s story is intricately woven entertainment.

In the universe of “Elysium”, Matt Damon’s character, Max, seeks to right the wrongs of a world turned inside out. In our present day universe, the emergence of 3D printing, powerful and cheap computing, elegant robotics, low cost access to space, and a global need for low carbon energy, may make it technologically feasible to build such human-created worlds very soon.

Perhaps the lessons of “Elysium” may help technologists calibrate their personal moral compasses.