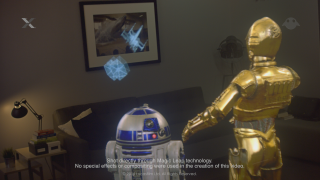 Events from "a long time ago in a galaxy far, far away" may soon be in your living room. Today (June 16), AR company Magic Leap and Star Wars production company Lucasfilm announced a partnership for a joint research lab located on the latter's San Francisco campus.

The main aspect of the partnership on Lucasfilm's side will be through Industrial Light and Magic, Lucasfilm's special-effects arm, and ILM's ILMxLAB for emerging entertainment. (You may have seen ILM's work in dozens of movies, most recently including "Captain America: Civil War," "Star Wars: The Force Awakens" and "The Revenant.")

At the WIRED Business Conference in New York City, Magic Leap and Lucasfilm showed off a video serving as a proof-of-concept for what the two companies could do together. The video features the two beloved droids from "Star Wars," C-3PO and R2-D2, in a living room watching a battle plan featuring X-Wings, TIE Fighters and the Millennium Falcon on a coffee table.

"At Lucasfilm and ILM, innovation has always been in our DNA" Lucasfilm president Kathleen Kennedy said at the conference. "Through this collaboration, ILMxLAB further propels our legacy of exploration and leadership on this new platform for experiential storytelling.”

Magic Leap has shown off a number of impressive video demonstrations, but hasn't released any images of the headset itself. The most anyone knows about the company came from a April 2016 profile of the startup in WIRED.