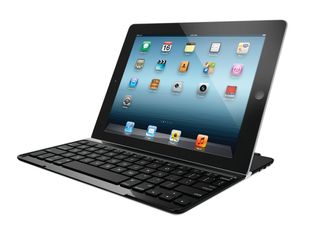 Logitech is expanding its iPad accessories with an Ultrathin Keyboard cover, compatible with iPad 2 and 3rd generation iPads. The slim aluminum cover provides screen protection while on the move and a Bluetooth wireless keyboard while at work. Logitech designed the case as an all-in-one solution for iPad owners by including a secure magnetic clip cover, built in stand and essential function keys. The cover even features an instant On/Off function, which wakes your iPad when it is opened and switches it to standby when the cover is closed. The wireless keyboard boasts a six-month battery life on a single charge, assuming you only use it 2 hours per day.

“The third-generation iPad and its apps are designed to give you more control and creativity, whether you are editing photots and movies, making music or writing a novel,” said Alexis Richard, director of product marketing at Logitech. “The new Logitech Ultrathin Keyboard Cover – with its ultra-sleek, smart design and extended battery life – provides a convenient way for you to make the most of your iPad no matter what activity you are using it for.”

For those who are interested, availability is expected later this month in U.S and Europe and priced at $99.99. However, I can't help but think that most people who have purchased an iPad were content that it had no keyboard, and those who were not and didn't buy one bought a netbook instead.