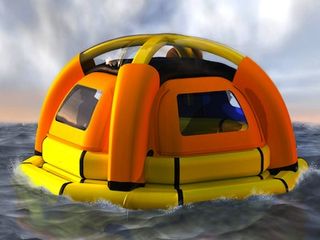 A new life raft design with a built-in human-powered desalination system may spell the difference between life and death for people lost at sea.

The aptly-named Sea Kettle is the brainchild of Kim Hoffman, a graduate school student of the Academy of Art University. It has hand pumps within the cabin for drawing in sea water into a three-liter plastic reservoir on the roof where the sun's heat will cause it to evaporate. The resulting salt-free vapor is then captured and collected in one of four shafts. The water then flows into pockets built in the raft's walls which can be accessed by the raft's inhabitants using tubes. According to Hoffman the raft can supply drinking water for five people daily.

Inspired by Mage Water Management's Watercone, the Sea Kettle has made it to the shortlist for this year's James Dyson Award, whose results will be announced on October 5.