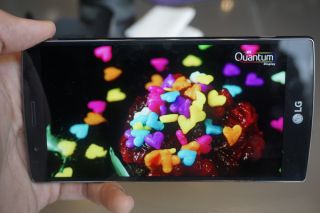 LG has set a date for product announcements at next month's Mobile World Congress show in Barcelona. So it's time to start cranking up the rumor machine about what's next for the company's flagship phones, led by a modular design for the anticipated LG G5.

LG will hold a Mobile World Congress press conference in Barcelona on Sunday, Feb. 21, the day before the smartphone expo officially opens. An invitation to the press event depicts a colorful box with a crank, along with the words "Play Begins."

It's unclear what, if anything, that cryptic message has to do with smartphones. But we're getting a more definitive picture of what to expect from the LG G5, based on rumors surrounding the device, as well as teaser announcements from LG itself.

You may never have to wake your phone up to see who's looking for you again. According to an animated GIF posted by an unverified LG Mobile Twitter account, the LG G5 will sport an always-on display that will constantly show the time, date and indicators for missed notifications.

Having a display that remains on, however useful, can quickly drain a phone's battery. If this feature turns out to be part of the G5, LG will either have to squeeze in a large battery or find an efficient way to extend battery life.

Other rumored specs about the LG G5's display appeared earlier on Reddit, in what 9to5Google called a "sketchy leak." Those specs claim the G5 will sport a 5.3-inch Quad HD display with the same 2560 x 1440 resolution of the LG G4, though LG's current phone has a 5.5-inch screen.

LG has seemingly confirmed that always-on display rumor by announcing a case for its yet-to-be-released smartphone. The Quick Cover announced by LG weeks before the G5's rumored debut includes an opening for the always-on display, which will let you check time, date, and notifications without having to open the case.

The Quick Cover for the LG G5 draws on earlier Quick Covers, with a semitransparent mesh cover. LG says the new case incorporates the touch functionality of its Quick Cover View for the K10 smartphone, which will allow users to take calls and adjust alarms without having to open the case. LG says the case will also have a glossy, metallic finish that complements the look of the G5, when that phone actually debuts.

Back in January, a CNET Korea report cited by Android Authority suggested a new modular design for the G5. The report depicts a thin LG phone with a bottom portion that slides out, which would let users change the battery. This modular approach would give LG's phone a thin, unibody design while also allowing the battery to remain removable.

If the modular design rumor pans out for the G5, it would be quite a departure from the phone's predecessor. The LG G4 featured a removable back panel so that users could insert a battery and microSD card. That design was certainly functional, though not nearly as stylish as the unibody looks of Samsung's Galaxy S6 or Apple's iPhone 6s.

In addition to the slide-out portion of the phone, the G5 could have an expansion port — dubbed the "Magic Slot" in some reports — where users can plug in accessories like speakers, keyboards, and even a VR headset.

The G5 will reportedly have dual rear cameras — one 16 megapixels and the other 8 megapixels. A Snapdragon 820 processor is expected to power the LG G5, which will retain a fingerprint sensor and add a USB Type-C port. The more powerful Snapdragon chip would make the G5 better equipped for enjoying VR experiences.

Are you excited about the G5? Keep it locked in to Tom's Guide and we'll bring you more info as soon as we have it.