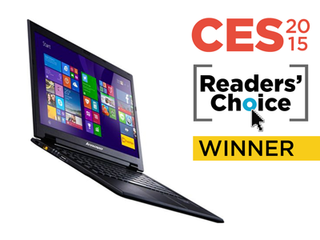 The votes have been tallied, and a winner selected. You, the reader, have named the Lenovo LaVie Z your favorite gadget at CES 2015.

Taking nearly 36 percent of vote, the Lenovo LaVie Z won the poll by a wide margin, with the Alcatel Onetouch Watch and ASUS Transformer Book Chi tying for second place. The secret to Lenovo's success? It likely has something to do with the lighter-than-air design of this laptop. Thanks to its magnesium-lithium alloy chassis, it was feather-light in our hands.

The 13-inch notebook configuration of the LaVie Z is the lightest anywhere, weighing just 1.72 pounds. Just as impressive, this laptop shows that you can peel off the pounds without compromising performance. We were impressed that Lenovo crammed in an Intel 5th-Gen Core i5 (or i7) CPU, a 128GB SSD and a full HD screen.

The LaVie Z will go on sale in May for $1,299, and will be available in traditional clamshell or Yoga-style convertible versions. Lenovo claims the standard model should last up to 7 hours on a charge, and the "heavier" 2.04 pound version will get up to 9.4 hours.

While the competition couldn't compete with the Lenovo fans out there, no contender went without any support. The CyberPowerPC Trinity Fang gaming desktop came in fourth, followed by the HP Zvr Display and the Sony XBR-X910C 4K TV tied for fifth. In seventh place, Razer Nabu X fitness band and LG G Flex 2 smartphone tied for last place.

So will you be lining up to buy a LaVie Z? Let us know in the comments below.