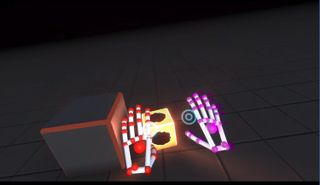 Sometimes things in virtual reality look so real, you want to reach out and touch them. Thanks to Leap Motion, we might do just that — sans any touch controllers.

According to Leap Motion's blog, the company has just unveiled an early access beta iteration of its Interaction Engine, which is builds on the Orion demo that launched early this year. Designed to help developers create more hand-friendly VR environments, the technology is an add-on of the Unity game engine that attempts to introduce real-world physics into the digital plane.

Described by Leap Motion as a "layer that exists between the Unity game engine and real-world hand physics," Interaction Engine has the ability to detect when you're grabbing an object, adding a feeling of solidity. The engine also lets developers customize throwing physics, determining velocity and positioning once an object is hurled.

The hand-tracking recognition has also undergone some improvements, allowing for better tracking of joints in the fingers than previously seen in Orion. The result should make interacting with an object in VR less frustrating. As an avid VR user, I can't tell you how many times I've reached for something using the HTC Vive's controllers only to watch my virtual fingers go through the object or pick it up at an unnatural angle. It's a flaw that can potentially ruin the entire experience.

If Leap Motion can refine its technology and work with headset makers, it could potentially eliminate the need for the controllers completely. But for now, we'll have to wait until software like the Interaction Engine becomes more than just a beta project.