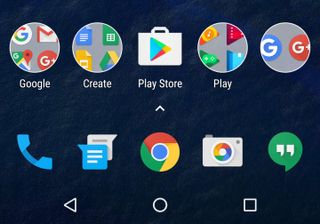 Rumors say Google will release two new Nexus devices in the fall codenamed Sailfish and Marlin. And while details about the new phones are sparse, a recently leaked launcher app gives a good glimpse at what using one of those upcoming Nexuses might look like.

The leak was discovered by XDA Developers user BeansTown106, and if you want, you can test it out for yourself by downloading a zipped APK here. Warning, because this is an unofficial leaked app, there's no guarantee that it will function correctly. After installing the APK on a LG G5, I noticed that some features were disabled, while others such as the new wallpaper settings caused the launcher to crash. Thankfully, things ran a lot smoother when I tested the leaked launcher on a Nexus 6P.

The biggest change the new Nexus launcher brings is how you access your device’s app drawer. Instead of needing a dedicated icon, you can just swipe up from the bottom of the screen to see a full list of your apps. Alternatively, you can also click the small up arrow located above the bottom app row to open the app drawer.

Other enhancements include a new wallpaper feature with daily updates, a new icon for quick Google searches, support for landscape mode and a new look for folders. You can also swipe left from the home screen for fast access to Google Now.

While we’re still not sure this is exactly what we’re going to see on the upcoming Nexus phones, I’m a big fan of simplifying the home screen, and this launcher does just that without losing any functionality. That said, I’m not sure I like the new circular folder icons. Tell us what you think in the comments.