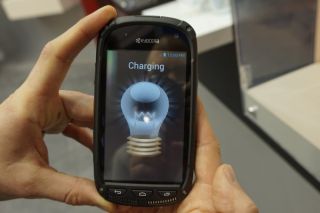 BARCELONA — Imagine that you're out in the wilderness, nowhere near a power source, and you need just a little more juice. You let your phone sit in the sun for a while and, bingo, you have enough energy to make that call. At Mobile World Congress, Kyocera showed a prototype version of its rugged Torque phone, which has a Wysips Crystal solar panel in the display.

We've been tracking Sun Partner's Wysips solar-charging technology, which absorbs light directly through the phone screen, for a number of years now. However, despite many impressive demonstrations and prototypes, no major phone vendor has incorporated it into a widely available device. The Kyocera Torque on display today was a prototype, but it looked very much ready for prime time.

As I watched, Sun Partner exec Matthieu de Broca launched a very simple app on the Torque with a graphical light bulb on the screen. When he placed the Torque under a strong light, the app displayed the words "charging." When he moved it out of the light, the app no longer indicated that the phone was charging.

Unfortunately, you'd need to leave Kyocera's phone in the sun for a very long time if you wanted to fully charge the battery. De Broca estimated that the phone would charge at a rate of about 1 percent every hour. If the phone were asleep, he said, the charge rate would likely exceed the power consumption, but if the device had its screen on, you'd only make up for some of the power you'd be using.

Kyocera hasn't announced any plans to use the Wysips Crystal panel in a product that's being shipped, but the Japanese company gave some very prominent booth space to the prototype, encasing it in glass with a light switch next to the case for demonstrating its charging capabilities. Perhaps the first Wysips-powered phone will finally come to market soon.