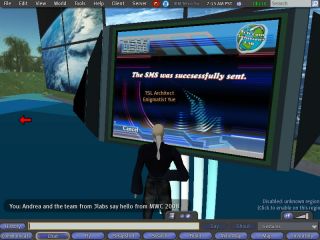 IBM introduced a stunning application during this year’s Mobile World Congress. It allows citizens of the virtual world to send and receive text messages and even place phone calls. Zygmunt Lozinski from IBM gave us a demonstration of the whole thing.

From the IBM Island

It’s from the IBM Island that Mr Lozinski sent an SMS to one of its colleagues. He just had to choose the name of an avatar to make it the message’s recipient. The colleague’s answer was then displayed in Second Life’s message zone.

Mr Lozinski also showed us how one could initiate a conference call between mobile phones in the real world. Simply gather all the participants’ avatars in one specific place in Second Life. Once everyone is here, the phones just get called simultaneously and the conference can start.

Those applications aren’t available to the public yet. They are still being developed by IBM’s R&D team.