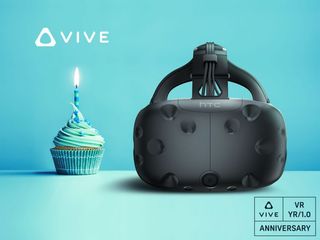 The Vive's 1-year anniversary is quickly approaching, and to celebrate HTC is finally lowering the price of its Vive virtual reality headset.

On Wednesday, April 5, consumers will be able to get the HTC Vive for $699, which is $100 under the headset's regular price. Unlike the Oculus Rift, the Vive has received no price cuts throughout its lifespan. (It briefly hit $699 during the holidays, but that deal didn't last long). Instead, retailers have opted to bundle it with budget PC graphics cards.

However, the Vive's temporary price cut isn't the only item on HTC's agenda. On Wednesday, the company will launch Viveport Subscription, a $6.99 per month service that gives members a new way to enjoy the hundreds of VR apps currently on the market. Paying customers will get unlimited access to 5 titles of their choosing each month. The titles, which are all curated, can be rotated each month, and customers will be able to keep the apps they like. The service will launch with more than 50 titles, including theBlu: Whale Encounter, Everest VR, and Mars Odyssey.

To kick off its launch, Vive owners will get a free month of service along with a complimentary download of Vive Studio's Arcade Saga ($19.99). The discount and freebies will only be available for 24 hours starting on Wednesday, so you better act fast if you want to purchase the best VR headset around.