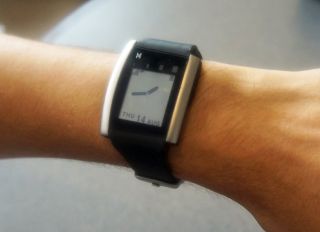 After a year of development, the Kickstarter-funded HOT Watch is finally shipping to its early backers. We went hands-on with this Pebble competitor to see what advances had been made since our earlier encounters with the device last year.

The HOT Watch will come in four versions: the Curve, which costs $236 and has a curved metal design; the $179 plastic model; and the Edge and Classic, which have square faces trimmed in metal and will each cost $208.

But it's not the face of the HOT Watch that distinguishes it from other smartwatches. The underside, where the clasp is located, has a large bulge that houses a speaker and microphone. This gives the HOT Watch a more Dick Tracy feel than any other smartwatch, as it allows you to make phone calls and talk to someone from your wrist. When I tried it out, the speaker was loud enough so that I could keep the watch a foot or so away from my face and still hear the other person clearly. I also like the fact that it works with Siri; considering it's compatible with Android and Windows Phones, I hope it works with Google Now and Cortana, too.

What also sets the HOT Watch apart from other smartwatches is gesture control; you can wave your hand to hang up calls, for instance. There are also gestures you need to trace on the screen to get to certain features; for example, drawing a "D" will open the phone menu, and drawing an "L" turns on the built-in LED flashlight. There's a lot of gestures to remember--it reminded me of the Graffiti shorthand on old Palm PDAs.

The HOT Watch is entering a soon-to-be crowded market, which includes the Pebble Steel, the Samsung Gear Live, the LG G Watch and the upcoming Moto 360. However, none have yet to capture the attention--or pocketbooks--of consumers, so the space is still relatively wide open.

Once HOT Watches have been delivered to all of the device's backers, the company plans to ship out pre-orders, which a representative said should be by the end of August. We're looking forward to fully testing the HOT Watch, so stay tuned for our full review.