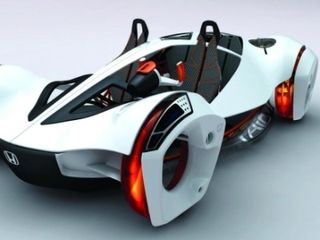 If you thought we've hit the bottom of the barrel with alternative energy sources, think again. Honda recently debuted its new concept car, the Air, at the recent LA Auto Show. What made the Air a highlight isn't its trippy Speed Racer-inspired look, but the engine. There isn't one, at least, not the engine you're familiar with.

The Honda Air actually runs on compressed air and a pneumatic regulator system. Yep, you read that right. No explosions, no electricity; just the most renewable fuel source on the planet. The chassis houses the main tank that powers the car. Turbo vacuums draw in external air flow during operation to extend the Air's range up to a full 100 miles.

Since it's running on nothing more than air, they've made it an ultra-light 800 lbs. This is achieved through a hub-less wheel and drive system. The weight is brought down further thanks to vegetable-based polymers for the bodywork, urethane tires, and a skeletal sub-frame.

The best part is, the tanks are refilled with a standard air compressor, so there's no need to build alternative fueling stations at all. The gas station's tire filler is good enough.