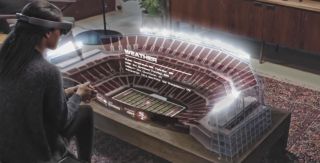 You're probably planning to watch Sunday's Super Bowl on a flat-screen TV with surround-sound audio that lets you hear every bone-crunching tackle. Maybe you'll even have a smartphone or tablet nearby to act as a second screen for looking up player stats and other game-time information.

The tech giant put out a video today (Feb. 2) showcasing the many ways its HoloLens augmented reality glasses can add another dimension to watching football games. Features touted by Microsoft run the gamut from enhanced player stats to an avatar of Seattle's Marshawn Lynch bursting through your living room wall. ("Marshawn... that was a load-bearing wall.")

You'll find the features Microsoft shows off in that video to offer varying degrees of usefulness. Fantasy players will doubtlessly enjoy the ability to summon up stats with the flick of a finger. And getting different perspectives on replays — especially by spinning a virtual playing field around in front of you — would be a welcome addition to any televised football game. But do you really need to summon up a holographic version of the stadium on your living room table just to check the gametime temperature? Microsoft thinks you do.

"Imagine The Big Game, extended beyond your existing screen, with displays, player stats and instant replays on your coffee table," Microsoft corporate vice president Yusuf Mehdi writes in a blog post accompanying the video. "With HoloLens, running Windows 10, your favorite players could be brought to life through high-definition, 3D displays, allowing you to experience the athleticism and skills behind their stats."

I had the chance to try on a HoloLens prototype last year, and while I immediately saw the industrial and academic value of Microsoft's augmented reality glasses, I found the consumer appeal to be more elusive. Microsoft's latest HoloLens video may just be a concept at this point — we're a ways off from the HoloLens being as essential to game day as a plate of nachos and a foam finger — but it shows how the glasses can be put to use in your daily life.