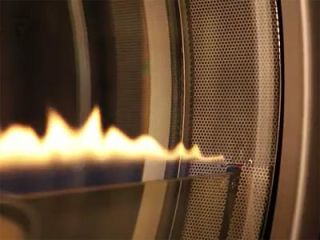 Being rich doesn't mean that you can't enjoy life's little pleasures. Was it not a certain citizen who, despite his wealth and power, mourned the loss of his sled? Of course, having enough money to throw around means that you can always up the ante, even with the simpler things. Heat & Glo understands those needs, and wants some of that money thrown its way. The Solaris solves all those problems at once.

The Solaris is a direct-vent gas fireplace that shares nothing in common with Santa's favorite infiltration point. The circular enclosure frames the transparent Razor™ burner, which gives the illusion of a single line of flame at the center, seemingly dancing upon thin air.

The Solaris comes in two models; the 36-ST and the 36-MR. The 36-ST is very thin, and is transparent on both sides, so it can serve as a strangely elegant window to either your garden or another room. The 36-MR, on the other hand, features two burners, mirrored glass and LED lights to provide a stunning infinity flame effect.

Both models can be customized to your own tastes, but that's going to jack up the $12,000 price tag. But hey, you're rich, you have the money to burn...