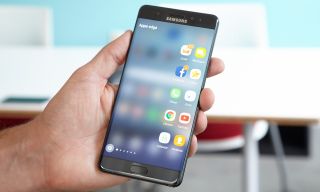 Samsung's Galaxy Note 8 is in production, and a leak on Thursday (May 25) suggests it might deliver a similar design to that of the Galaxy S8.

A Twitter user from China using the handle @mmdj_china shared a video on the social network purporting to show the Galaxy Note 8's front panel. While it's impossible to know for sure whether it's the real deal, it appears to come with a design similar to that of the Galaxy S8, complete with small bezels and no room for a physical home button.

The video, which was earlier reported on by SamMobile, provides some hints at what Samsung might have planned. The panel in the video has curves on either side and small bezels at the top and bottom. There appears to be an area for a front-facing camera on the panel, and the screen looks to be rather large, though the person holding it didn't say how big it is. It looks somewhat like the Galaxy S8+, but might be a bit bigger.

Samsung has confirmed that it's working on a new Galaxy Note device. While the company has remained silent on its plans, several reports have suggested the device could come with a 6.3-inch screen, making it slightly larger than the Galaxy S8+'s 6.2-inch display. Samsung is also expected to take some design cues from the Galaxy S8 line and remove the physical home button.

More: Galaxy Note 8 Rumors: This Could Be Hottest Phone of 2017

It's impossible to tell whether the faceplate in the latest video leak is authentic. Although the Galaxy Note 8 is believed to be in production in China, leaks from the country can be spotty, so it's best to take this one with the proverbial grain of salt. It is worth noting, however, that the faceplate appears to come with all of the features that have been rumored for quite some time.

Samsung is planning to release the Galaxy Note 8 this summer. Look for many more rumors and leaks to crop up between now and then.