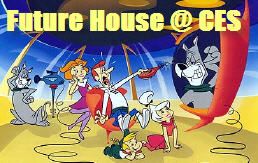 Three years ago, I sat in the audience as Bill Gates gave one of his last ever keynote presentations at CES. The year was 2007, and Gates spoke, as he often did, about the home of the future. Vista would be the operating system of the future, Media Center would dominate the future living room, LCD wallpapers would adorn the bedroom walls, Ford’s new “Sync” service would let us speak to our cars, and—oh, yeah—the kitchen would feature a projector beaming a touch screen onto the countertop with RFID access to the ingredients in our cupboards. In all, he presented a concept for the totally automated home—the kind of thing bordering upon what most of us associate with flying cars, jet packs, and the computer aboard ships in Star Trek.

At CES 2010, I actually saw much of what Gates described back in 2007. We’re way past Vista now, and Ford Sync is a real product. But what about the kitchen? On the show floor in 2010, there is very little to see. I spent hours scouring the show floor for signs of 2010’s version of the home of the future. Bill Gates wasn’t there to help, but I came to some interesting conclusions: most consumer electronics companies are not interested in the kitchen, even though a few companies are developing concepts under the radar, but every other room of the house is fair game for a technological makeover. More On CES

Current page: Seeking The Home Of The Future