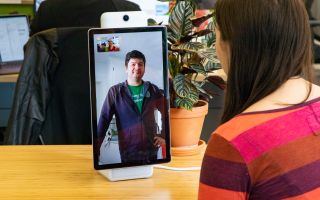 But we weren’t big fans of either Portal, and not just because of Facebook’s never-ending privacy issues (though the idea of letting Facebook put a camera in our home isn’t that appealing).

Other smart displays, such as Amazon’s Echo Show, are more capable at doing their jobs: helping you accomplish tasks using your voice and the device’s screen. For instance, the Portal doesn’t support Alexa’s visual skills, so you can’t use the display to control other Alexa devices. There also aren’t many Portal-specific apps yet.

But Facebook says more apps are coming soon, so if you trust Facebook, the Portal and Portal+ are well-designed and wouldn’t look terrible in your kitchen or living room.

But for just $30 more than the smaller Portal, you can pick up an Echo Show starting Nov. 22. That’s a smart display we can get behind.