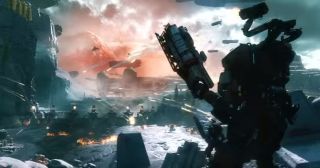 Electronic Arts ushered in the official start of E3 2016, with an early-afternoon EA Play showcase packed with new gameplay reveals and a few small surprises. We mostly saw more of games we already knew about, but considering how great Titanfall 2, Battlefield 1 and Mass Effect Andromeda look, we’re not too upset by that. EA also has a bunch of promising Star Wars projects in the works, and the company even managed to make FIFA look exciting. Here are our highlights from EA at E3 2016.

We all knew it was coming, but that didn’t make EA’s Titanfall 2 gameplay reveal any less exciting. The follow-up to Respawn Entertainment’s frenetic mech-flavored shooter series is shaping up to be bigger in every way possible, adding more dynamic combat options, new mechs to battle in, and — finally — a proper single-player mode.

You’ll finally get to explore Respawn’s techy sci-fi universe on your own, with a full campaign that pits you against both soldiers and amphibian-like wildlife. It wouldn’t be Titanfall without multiplayer, and the competitive gameplay we saw shows off some exciting new abilities, such as being able to lasso an enemy pilot in mid-air, yank them toward you and punch them in the face. Look forward to more Titan-falling and pilot-punching when the game drops on Oct. 28 for PS4, Xbox One and PC.

While we didn’t quite get the massive Mass Effect Andromeda gameplay reveal we were hoping for, we did get a nice little tease of the highly anticipated sci-fi action-RPG during a behind-the-scenes video. The small snippets of in-game action showed everything you’d expect from Mass Effect: beautiful, distinct worlds, intense third-person shooting and a whole bunch of interesting looking alien friends and foes. It’s powered by EA’s Frostbite graphics engine, so it looks really pretty. The game is currently due out in early 2017 for consoles and PC — that’s about all we know so far.

EA has a bunch of new Star Wars projects in the works, and while we didn’t see much in the way of gameplay, they all sound pretty cool. A sequel to 2015’s Battlefront is launching next year featuring characters from the new films. Developer Dice is working with EA’s Motive studio on the new game, which leads us to believe there will be a proper single-player mode this time around. We also saw a few seconds of the upcoming Bespin DLC for the current Battlefront game, which introduces the one and only Lando Calrissian.

Dead Space developer Visceral Games has a Star Wars action-adventure game due in 2018, and with Uncharted alum Amy Hennig leading the charge, we’re guessing it’ll be a narrative-heavy experience. Titanfall maker Respawn Entertainment is also working on a third-person Star Wars title “set in a different time period.” We’re not sure what that means, but a behind-the-scenes video did show some lightsaber motion-capture action.

A month after revealing its new World War I shooter Battlefield 1, EA took to E3 to demonstrate just why you’ll want to play it. Battlefield 1 is shaping up to be the largest-scale Battlefield game to date, with 64-player multiplayer that takes place on the ground, in the skies and even on horseback. The game’s air combat looks especially intense, featuring propeller planes and special “behemoth” vehicles, such as zeppelins. Battlefield 1 launches Oct. 1 for PS4, Xbox One and PC. Call of Duty seriously has its work cut out for it.

I usually have a hard time staying awake during EA’s sports game trailers every E3, but FIFA 17 actually looks exciting. The game appears to have a quasi-story mode called the Journey that follows the career of star player Alex Hunter, complete with all the ups and downs that come with being a pro athlete. FIFA is one of many new EA games to embrace the Frostbite engine, which basically means that players and coaches look even more eerily real. EA went on to tout the game’s usual new crop of gameplay features, but The Journey seems like the standout.

Pretty much every big name in gaming is embracing eSports, and EA is no exception. The company promised to go all-in on competitive gaming with three special types of events. Challenger Events are online competitions anyone can enjoy; Premier Events will consist of large-scale live competition, and EA Majors will be “marquee” global event — think the World Cup for video games. EA isn’t just all talk, either: the publisher already announced that a whopping $1 million will be on the line during the Madden 17 Championship series.

Some of EA’s coolest announcements had nothing to do with a big blockbuster game. The company revealed a commitment to indie developers with EA Originals, a publishing initiative in which devs get 100 percent of profits on the games they make. One of the first EA Originals will be Fe, a beautiful-looking platformer about interacting with nature.

EA also revealed its Play to Give campaign, in which the publisher will donate $1 million to charities that support developers and women in the workplace. Gamers can complete challenges in games like Battlefront and Madden in order to support the new program.