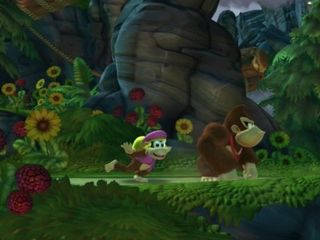 Even though the game is no longer coming out for the holidays — it recently got bumped to a February 2014 release — "Donkey Kong Country: Tropical Freeze" remains firmly on the radar of Wii U owners. Along with returning favorites Donkey and Diddy Kong, this latest entry will also bring back another favorite from the series — Dixie Kong.

Dixie isn't just a pretty face, however. She can use her ponytail to swing around in mid-air, just like in the earlier "Donkey Kong" games. She can also pick up objects and strike enemies with it, among other things.

To coincide with Dixie's return, Nintendo has released a new trailer that shows her in action. Now we just need to confirm Cranky Kong's return and we'll be in business.

"Donkey Kong Country: Tropical Freeze" will release early in February for the Wii U. A price has not yet been announced.